I refuse to say,”This is where I’m at.”  I may be very down, very low, and certainly not functioning well, but I still know correct grammar from incorrect, even if it has become socially acceptable to say “where I’m at”.  What does society know anyway?!

This is where I am. 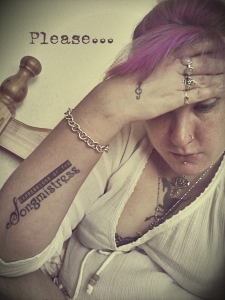 And, now, yes…I’m going to sing to you, here in this place where I am.

Doctor, Doctor, can you tell me what is wrong?
Can you fix me with this song?

Seems I can’t get out of here, and the walls are closing in
The pressure in my head is high, and the air, it feels so thin
Will someone call my name, please? Won’t you open up the door?
This room’s more like a prison cell; I can’t take it anymore!

Doctor, Doctor, can you tell me what is wrong?
Can you help me with this song?
Doctor, Doctor, I’ve been waiting here so long
It hurts when I breathe, and all my strength is gone

Doctor, Doctor, it’s been hurting for so long
Can you help me end this song?

Doctor, Doctor, there are no words left to say
And I have no more chords to play

When existing with a disability or chronic pain and illness, one is constantly aware of one’s limitations. The word ‘limitation’ has a negative connotation. I, suppose, I am perceived as a pretty negative person.

Cynical, perhaps. In a very real way, broken and defeated. But, I’m not what I’d call negative but, rather, realistic. Some might call that delusion. Again, I see it differently. And, I’m beginning to see the hindrances I suffer as boundaries rather than limitations. There. A positive spin.

The Best Friend Boundary
Other people have “besties”, “BFFs”, whatever. I can’t seem to get and keep one of these. It can bother me. Make me feel like I’m not good or lovable enough to have one of these. I know, intellectually, it’s a problem with life and other people (but, mostly just life being the bastard it is), and not because I’m somehow unworthy to have a best friend. It’s just a boundary, with a high wall that can’t be scaled. No answers. No solutions. It is what it is.

The Success Boundary
If success was measured by producing good music, writing brilliant songs and having a beautiful voice, then I’d be extremely successful. But, we all know, success, when it comes to any talent and art, is measured by fame and money. Here lies the boundary I cannot cross. I take comfort in the beauty and virtue of the music I make. It doesn’t pay my bills, however.

I do the best I can. And, any small victory is a huge triumph.

One day, life will stop its twisted game with me…death may be longer in coming than I want it to be, but it will have the last word. Until then…like adventurers before me, I explore the boundaries.

Allow me to set the stage for you: it’s morning, and I am NOT in any way a morning person (mourning? yes. morning? no! however I think there’s a good reason these words sound alike); my husband brings me a cup of coffee (because he’s amazing like that) and then proceeds to check his Facebook feed on his phone.  This is where he discovers that someone has shared something about a cover of Stairway To Heaven, and he clicks the link and listens to said cover. I won’t go into details.  It’s very good, as covers go, if a bit too much like the original for me (after all we HAVE the original already; I believe in putting your own stamp on a cover, not trying to make a carbon copy; I see no point in that… but I really, really digress, as this is not what this post is about). Then, he finished looking at what he was looking at and prepared to leave for work, leaving me with a cup of coffee and an earworm.

The opening riff of Stairway To Heaven wouldn’t leave me be. On a technical level, this is not a complicated song.  What makes it what it is, is simply the artistry of the performers and, no matter one’s interpretation of the song, or whether you like it or not, that artistry is quite tremendous.  This makes Stairway to Heaven a song that most people consider a guitar classic. A guitar classic that was now stuck in my head.

Sitting on the bed, I gazed down to the floor where my lyre harp sat.  I picked her up and began plucking that opening riff.  And, it sounded pretty.  It sounded light and bright, instead of dark, but still haunting and unmistakably Stairway To Heaven.

I went on to record it on my phone and make it my ringtone.

See, there are just a whole hell of a lot of things I can’t do, things I am prevented from doing for one reason or another. I find life to be a very great adversary, and most days the uphill, losing battle is extremely obvious.  But, while everyone with a smartphone has the capability to create their own ringtone, not everyone could make one that sounds good. Not everyone can play the lyre harp, and not just anyone would have thought to play Stairway To Heaven on it even if they did know how to play one! All the things I cannot do sometimes feels like a very unfunny joke. Oh, but what I can do seems like a highly amusing one – a laugh in life’s face.

I did it because I could.  And, in a world where I don’t fit and don’t belong, it’s being ABLE to do things like this (and, then actually DOING them), that can bring a feeling of cool accomplishment (and, yeah, that bit of needed laughter).  ‘Yeah, I rock.  Hear my ringtone?  I’m not going to answer my phone, because I suffer from social anxiety and don’t answer or make phone calls, but just listen to that lovely ringtone.  Isn’t it nice?  I played that. Yup. I made that.  Why, yes.  That is Stairway To Heaven. Played upon the lyre harp.  Yes, it is.’

Life is a harsh bastard. So, I take what I can get. And, I give what I can give, as well.  And, I do it….because I bloody well can.

It’s been a while since I posted. I’m not doing well and, even when I have lots to say, it can be too much for me to get over here and write it. And, then, sometimes, when I do, it feels like I’m just listening to the sound of my own voice. And, while I’ve been known to like the sound of my own voice singing, listening to my brokenness sans music can drag me further into a dark place where I am more lonely, more wretched, more pathetic. So, I go long periods without blogging about how and where I am.

I’ve withdrawn, with the exception of going to the Acoustic Club regularly to perform. Music is a drive that won’t relent, me being ill or not. And, at least now I have a place that appreciates not only my voice, but my songs as well. All my original stuff has been well received, and that is an exquisiteness. A delight.

But, yes, I’m struggling…to stay out of bed, to feel anything other than desperation and despair. And, struggling for words to express it all…well, that can just be overwhelming on top of already being overwhelmed. And, yet…here I am…saying something, and nothing at all.

I don’t have access to my proper recording equipment and software at the moment (and, there’s no telling when, or if, I will again) so this morning I simply recorded this cover of Matchbox 20’s song on my phone, using the Soundcloud app. I leave you with it, in the hopes that anyone listening other than myself will hear in it whatever it is I’m trying to say.